Is this kind of like the tobacco business, with falling customer counts but rising prices? Cable companies ought to have some properties of good businesses: lack of competition and stickiness. How many choices do customers have, and how often do people switch their phone, cable, or internet providers, even when they have a choice?

The fixed cost structure is bad when customers are leaving. That's not a problem that the tobacco companies have. However, Frontier was able to cut some costs. Network access costs declined 13% year-over-year in the third quarter. And their own "network related expenses" were down 3%. The third category of recurring cash expenses, SG&A, was flat. The result was that EBITDA for Q3 was $781 million, versus $852 million the prior year - down 8.3%. That is more than the revenue decline - thanks to operating leverage. The current EBITDA figure would be $3.1 billion annualized. At the current run rate, this year's capex will be $1.2 billion, for a projected FCF of $1.9 billion before allowing for further customer declines.

We have previously mentioned that Frontier's debt is distressed, and that hedge funds are prodding the company to file for bankruptcy. You can readily see the unsupportable leverage of Frontier by the market value of its equity (only $68 million) compared to its total liabilities ($21.7 billion in Q3 2019), or by the trading prices of its unsecured debt. The capital structure consists mainly of $10.9 billion of unsecured holding company debt (which is the fulcrum). Senior to that is $5.7 billion of secured debt, which consists of $2.45 billion of bank debt and then $1.65 billion of first lien secured notes (8% due April 2027) and $1.6 billion of second lien secured notes (8.5% due April 2026). 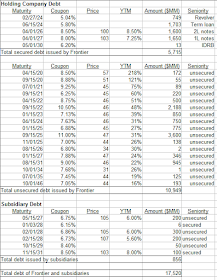 The total debt load is $17.5 billion. There is also $2.1 billion of pension, post retirement benefits, and other liabilities; and $1.7 billion of non-debt current liabilities, against $1.6 billion of current assets (excluding assets held for sale).

One thing you will notice is that the unsecured holding company debt maturing between 2021 and 2046 is trading solidly in the 46 range, with the exception of a couple tiny pieces and more notably with the exception of the two pieces that mature in April and September of 2020. It is a distress indicator when you have debt of higher and lower coupons all trading at the same price, based on an assumption of what the recovery will be. Even the fat 10.5% coupon on the September 2022 debt is not enough to budge the price from the same level that a January 2025 6.88% bond is trading at. Another good distress indicator is the fact that the $10.9 billion principal amount of unsecured debt trades at a market value of $5.1 billion - a $5.8 billion "hole" in the capital structure. The higher price for the 2020 debt suggests a small chance that the company will limp along for another year.

As Moody's commented on November 12:


Frontier's credit profile is supported by the company's large scale of operations, its predictable cash flow and extensive network assets. The rating is also supported by the company's improved ability to generate cash following the elimination of its common dividend in early 2018. Moody's expects Frontier to have adequate liquidity to retire the remainder of its outstanding unsecured debt maturing prior to 2022. Frontier has been meaningfully reducing its refinancing risk hurdles in the near term, including through a March 2019 refinancing of short-dated first lien term debt with a first lien bond offering. Though Frontier expects gross proceeds of $1.352 billion from the sale of western state operations in first half 2020 (subject to closing adjustments), the use of such proceeds remains undisclosed but will likely facilitate capital structure enhancement efforts.

They just sold their "Northwest Operations" (Washington, Oregon, Idaho, and Montana) for $1.35 billion, which represented 7% of revenues, but chose not to disclose what proportion of operating profit these operations represent. Considering that this would value the entire enterprise at $19 billion, it is likely that this company followed typical "circling the drain" behavior and sold one of its better divisions in order to buy time. It's always easier to sell a better division.

It may be possible to use some of those $1.35 billion proceeds to pay the 2020 debt maturities and interest payments, which include something like $333 million on March 15 and $381 million on April 15). On the other hand, there are leverage covenants in their secured debt that apparently step down from 1.5x EBITDA to 1.35x EBITDA in Q2 2020. They have $4.1 billion of first lien secured debt, so the 1.35x limit would be iffy given the recent $3.1 billion of annualized EBITDA. So if the company decides not to restructure, it may need to take a good chunk of the proceeds to pay down first lien debt with covenants before it could use any to buy back unsecured debt at a discount.

So we can guess that this company will restructure in 2021 if not next year, and we know that the unsecured is the fulcrum security. The question is: what should the unsecured debt be trading for. In order to estimate that, we need to think about the value of the enterprise and the liabilities that are ahead of the unsecured debt. Frontier itself attempts to assess its enterprise value, as disclosed in its filings:


We use a market multiples approach to determine Frontier’s enterprise fair value for purposes of assessing goodwill for impairment. Marketplace comparisons, analyst reports and trends for other public companies within the telecommunications industry whose service offerings are comparable to ours have a range of fair value multiples between 4.1x and 7.6x of annualized expected EBITDA as adjusted for certain items.  At September 30, 2019, we estimated the enterprise fair value using an EBITDA multiple of 4.4x.

Using a 4.4x multiple on $3 billion of EBITDA would imply that the enterprise is worth $13.2 billion. Enough to cover all of the secured liabilities and structurally senior subsidiary debt of $6.6 billion, but not enough to cover the unsecured debt and other unsecured liabilities, which appear to total $13 billion. This would leave unsecured creditors with ~50 cents on the dollar, just north of where the bonds are trading right now. When was the last time we even saw a pre-bankrupt company with  unsecured debt that stood to recover something?

Of course, we should not take the company's EBITDA projection or multiple at their word. Here are some competitors in the space (CenturyLink, Cincinnati Bell, and Consolidated Communications Holdings) and their enterprise value multiples.


The FTR is for the enterprise value of the debt only, at approximate market values of the debt. Notice that CBB and CNSL have very small market capitalizations in relation to their enterprise values. As one analyst we read pointed out, "at some point, all industry players will not be able to service their unsecured debt and will need to restructure". That analyst also pointed out that the CBB and CNSL stocks are probably inappropriately valued:


Unsecured debt of CBB and CTL is being created at substantially higher multiples, compared to those of CNSL and FTR. The same pertains to the market creation of unsecured debt plus equity. Why? Just because these companies are paying dividends.

So here is how the FTR unsecured recovery would look for the following pairs of EBITDA and EBITDA multiples, and assuming that $6.571 billion of liabilities would be in front of them and they would share with $13 billion of total unsecured liabilities:


The big questions are: what is the EBITDA that this business will earn going forward, and what multiple would the enterprise be worth. On the EBITDA question, it is alarming how rapidly the company's business is shrinking. They went from 4.85 million customers at the end of 2017 to 4.2 million now, a 13% drop in under two years. With that level of customer exodus, the chart of historical EBITDA by quarter is not too pretty.

The analyses that I have seen are pretty complacent about EBITDA. They take a >$3 billion level as a given and then assume that since CBB and CNSL's debt (which both trade close to par) create those enterprises at >5x EBITDA, FTR will do the same. The problem is that if the ice cube continues to melt, not only will EBITDA be lower, but it will probably be worth a lower multiple. In the 2x2 matrix of unsecured recoveries above, there's really only a line of realistic outcomes: low EBITDA, low multiple; or high EBITDA, high multiple.

Unless you can have reason to believe that the decline in customer losses is about to stop, there does not seem to be a margin of safety in the unsecured debt. If 13% of customers (net - more after figuring churn) left over the past two years, they probably went somewhere, since they are not likely just canceling their internet entirely. There must be competitors in Frontier's markets that are better or cheaper and are eating their lunch. For all we know, the most alert or savvy customers are the ones who just left and it is the beginning of an S-curve of the slower to react customers leaving too.
CP at 8:53 AM